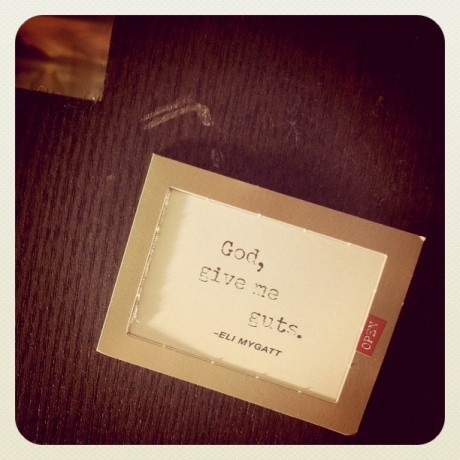 This year was by far filled with more transition than any other to date. In January I was visiting my family in MN in -12 degree weather and loving the 15 degrees it was when I returned home to Appleton. All the while I was laughing at my friends in Nashville who were freaking out about the 2 inches of snow they had. And I was loving the multiple feet of snow falling in Appleton. Fast forward to this month and I was the one freaking out about the 2 inches of snow that were falling in Nashville.

Mid-January I headed to St. Louis for the first Visual Worship Roundtable. And in March I was heading to the second one in Nashville. Little did I know just how much those couple of days and a conversation with a stranger, who is now a friend, would change my life. When I got home from that trip I made a frame collage type thing. Inside the frame was a cup sleeve from Crema and I wrote three things: Remember the out, Surrender fear for trust, and Amos 5:21. It sat on my desk at church from March will June right next to my computer where I saw it every day. I was looking at it back in October and realized that deep down I think I knew in March that I would leave my church and end up in Nashville. I went home from that trip and wrote this post. Five months later Nashville was home.

It truly amazes me just how different life turns out than what we imagined. If you would have asked me New Year’s Day 2010 what the year ahead would hold, I don’t know that there is too much I would have accurately predicted. For the first time in I think six years I am not involved in planning and executing a worship service on Christmas Eve. I left a church I had never imagined leaving, moved to a city I’d never visited before this year but for which I was homesick after my first short visit. This year I have lost more old friends and gained more new friends in one year than I think any previous one. I am ending the year fighting for relationship over religion realizing I cannot serve both of those masters. I have been cut and pruned and broken. But I have also been restored and healed. God has redeemed some incredibly hurtful and difficult experiences and restored relationships, demonstrating once again just how faithful He is.

I have more questions now than I did in January and more questions than answers. I am apprehensive about the risks God has planned for me I am also extremely excited. I have incredible excitement for the movement of God through His Church in the years ahead. Because at the end of the day I have hope. I have hope for the world, hope for the Church, and hope for my own life because this year God has shown His faithfulness time and time again.