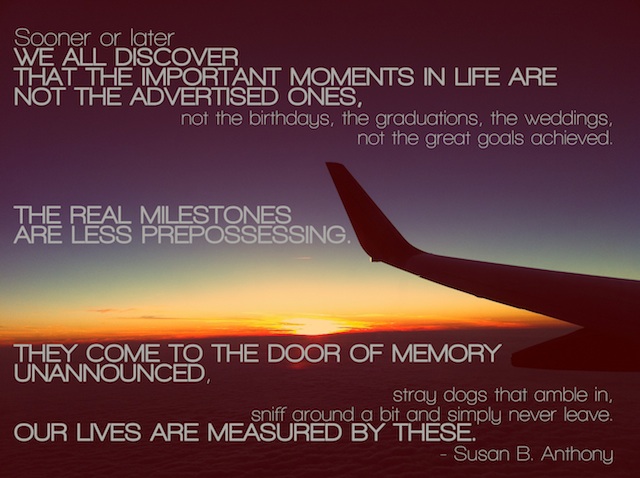 Something about this time of year always brings “five hundred twenty-five thousand six hundred minutes…how do you measure a year?” to mind. The truth is there are a million ways to reflect or look back on a year; to measure it’s worth & memories.

Being a lifelong sucker for nostalgia, I savor the time spent remembering.

2012 was packed with more life than I would’ve ever believed possible for one year. It has simultaneously one of the most painful yet richly beautiful years of my whopping 27. And there’s a sense of accomplishment in reaching the end of it with hope, though threadbare in spots, well in tact.

Because in the end, the things I remember most about this year are things like:
Countless game nights, laughter, & family dinners with my favorite people
Summer evenings at Arrington with friends
Moving
Helping a friend finish his book
Another successful STORY experience
Working with more than 10 new clients
Impromptu ice cream runs on warm summer nights
Too many nights of too little sleep
Conversations of the heart over multiple cups of coffee
Amazingly beautiful live music
Terrible live music
Life-giving conversations with strangers
Dreaming with friends
Spontaneous dinner conversations over Mexican food
Old friends getting married
Supporting friends in their art
Roadtrips
Dancing in the rain
Sunday nights with incredibly talented musicians

As I stood in a room the other night listening to some of the most beautiful musical sounds I’ve heard yet, I was in awe of the magically intangible spirit of the place. One of community, generosity; a like-minded heart to create art for the love of it & to help others in the process – a spirit of friendship that exceeds personal agendas. That spirit is what comes to mind when I think about Nashville & that spirit is what makes this place home.

Even after more than two years, there are days it seems like a dream to be living a life in which my heart feels at home. If I’m honest, there are too many days I take that incredible reality for granted.

As we start another year I’m recommitting to measuring my life in moments, in friendships, in community, in love, in life-giving adventurous risks. 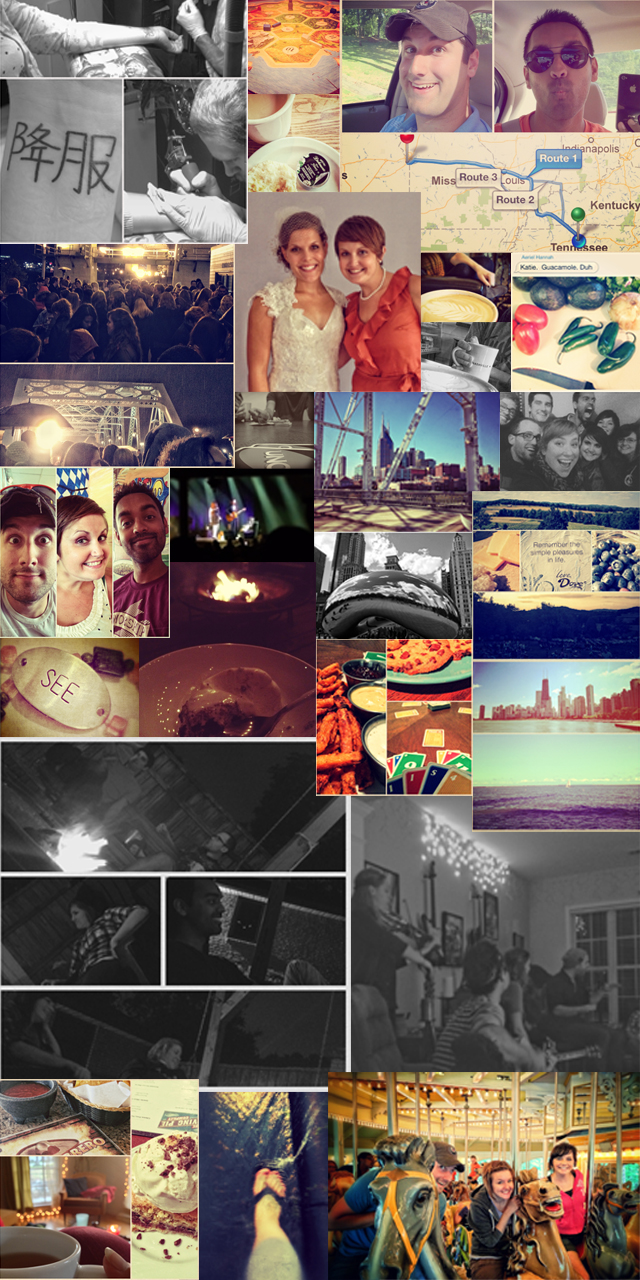 p.s. – If you’re curious, these were the top 5 most read posts this year:
In Between
Lion King 1 1/2 Meets Flickering Pixels
Be passionate about something
SEE – One Word 2012
I Think i Found the Secret 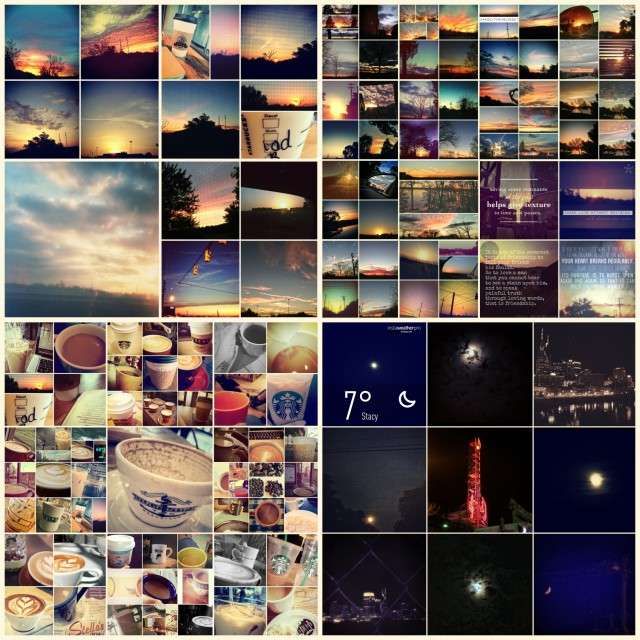 “How do you measure, measure a year?
In daylights, in sunsets
In midnights
In cups of coffee…” 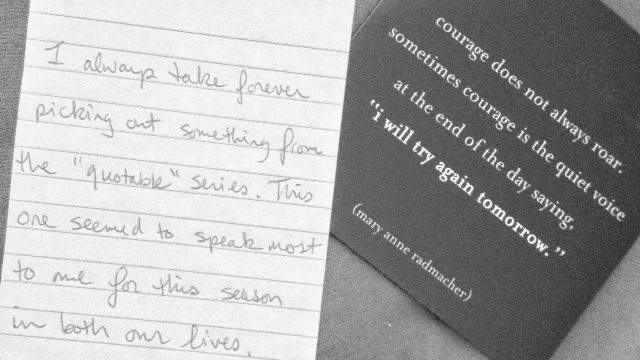 It was first word that came to mind when I started thinking about one word for 2013. But I quickly dismissed it as “too easy” because courage has been on my heart a lot recently. It’s also one I’ve written about, talked about, & come to value deeply in the last two and a half years. Honestly, it’s one I thought I had “figured out” on some level.

So I continued to think on it, pray about it, what other word might I need to learn?

But it kept coming up. My thought processes kept leading me back to it.
Last week, the items pictured above landed in my mailbox.
The kicker was late last week: I was digitally thumbing through old blog posts today when I landed on this one:

I had one of those painful looking in the mirror moments. Most of the things I wrote on April 18, 2010 I still haven’t had the courage to do. Over two years…mountains of growth I thought…yet I had to be honest that I still didn’t have the courage to do most things on that list.

“You’ve got courage ‘figured out,’ huh?” I laughed at myself for a minute. And then I remembered the one thing I learned above all else about “seeing” in 2012 – with it comes responsibility. Responsibility to act. And that requires courage.

That sealed the deal. The last 12 months has been grace to really see life, to see it to the point that I feel it in deep in my soul. Now, it’s time to do something about everything I’ve seen. So 2013 will be about courage: Courage to speak not just think, to embrace freedom, to love unashamedly, to be honest, to do not just dream. Courage to say no, to start & to quit, to choose vulnerability. Courage to stay. Courage to feel. Courage to act.

Curious what the whole “one word” thing is about? Check this out. 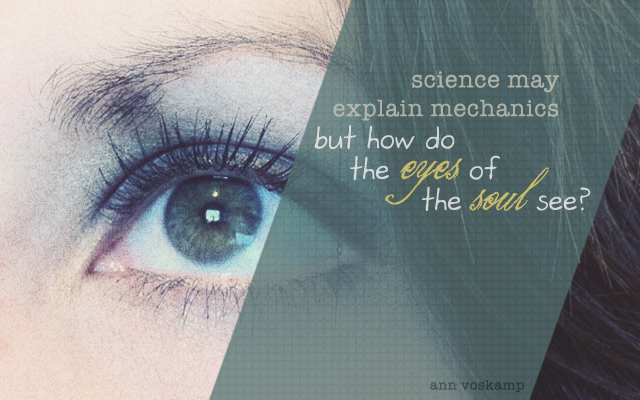 To see is to surrender assumptions & “the way it’s always been” in order to discover what really is. (from my 1st “One Word 2012” post)

I knew committing to a simple three letter word was going to be easier said than done, but I don’t think I knew just how much wrestling three letters could incite.

I also don’t think I knew how prophetic that sentence above was going to be – the shattering of assumptions has been a theme of my life in 2012.

Seeing is hard work. But it’s life-changing work – for me & for others. Seeing slowed me down. It fostered gratitude. It changed my perspective. Seeing myself taught me the value of grace. Seeing others replaced judgement with love & compassion.

At the end of it all, I come back to two things:
1. Seeing is about choosing to be vulnerable to life.
2. With seeing comes responsibility to act

My reality was redefined in 2012 because I opened the eyes of my soul. The challenge I’m left with is to do something about it. And that, my friends, is what 2013 shall be for.

p.s. – Even Seth Godin is encouraging more of us to do the work of seeing 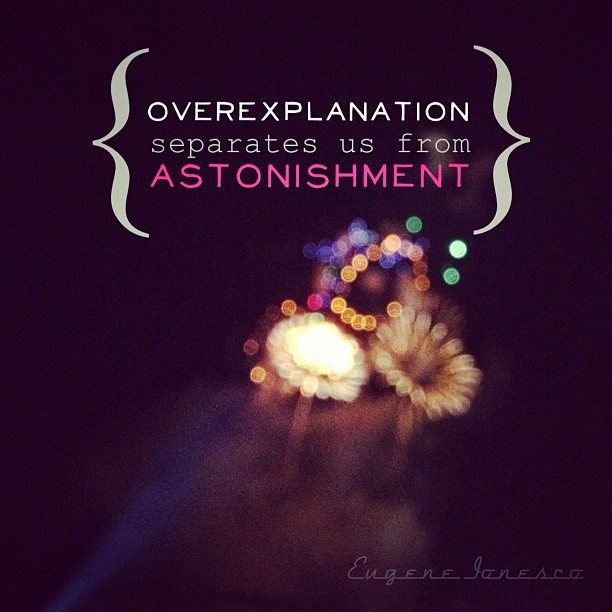 Be astonished this weekend.
By the connection of community.
By  the beauty in pain.
By a snowflake. A sunset. A flower blooming in December.
By the little things.
By rest.
By mystery.
By the unexplainable.

I am inspired & intrigued by others’ stories – how they see the world; the experiences that have shaped them. Maybe because when I find a piece of my story in someone else’s it makes me feel a little less crazy :)

Live What You Love: Notes from an unusual life (the new paperback edition says “passionate life” I prefer “unusual” :)) was one of those stories for me…the kind I found a piece of my own it. Or at least the story I wanted to have – an usual one. It is hands down one of my favorite books. I’ve read it 3 or 4 times & re-read parts of it from time to time just for fun.

A little taste for you… 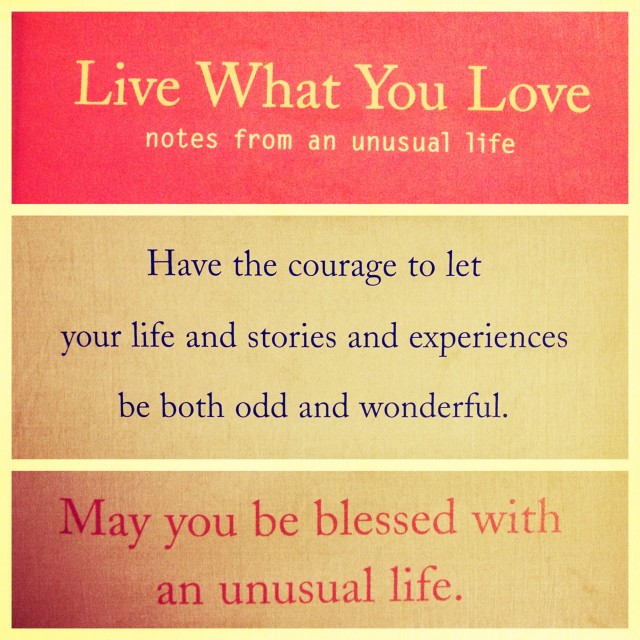 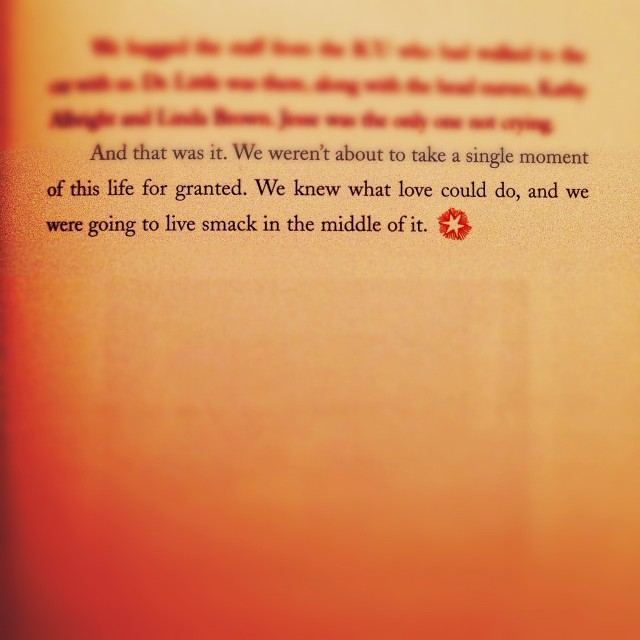 I know…anyone who shares their story of an unusual life has my attention. :) If you’re looking for a fun vacation read or just want a little inspiration going into the new year, check it out.