This poem was written somewhere around the 1920s. It’s eery to me how true it is of today’s world. I read it and I hear a warning and encouragement to stop, take a step back, and rethink what we’re doing and more importantly why we’re doing it.

First dentistry was painless.
Then bicycles were chainless,
Carriages were horseless,
And many laws enforceless.

Next cookery was fireless,
Telegraphy was wireless,
Cigars were nicotineless,
And coffee caffeineless.

New motor roads are dustless,
The latest steel is rustless,
Our tennis courts are sodless,
Our new religion — godless. 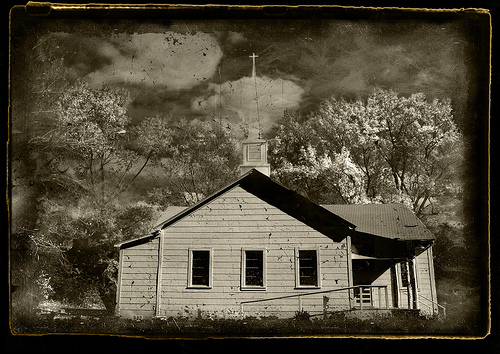 I spent this past weekend visiting my family in Minnesota. I was paging through a church anniversary book when I came across something that made my heart smile. The book was celebrating the 125th anniversary of what was my one grandpa’s childhood church and the one where my other grandpa was involved in a major building project. There is something sweet about the blending of the two sides of my family in that one church.

I was paging through the book and found a letter my grandpa wrote at the end of the building project. They had successfully moved the hundred year old church building to a new location, all stained glass windows in tact, and added on to it the space they needed. The result served their people well.

My grandpa passed away four years ago and I smiled when I read the last line of his letter: “The church building itself is the structure that we worship and glorify God in. The real church is the people.”

I think my grandpa was wiser than I knew. 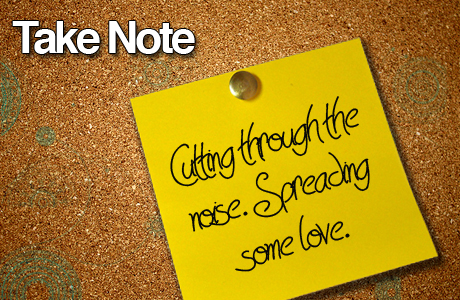 It is easy for people and groups of people who are making a difference to get lost in all of the noise today. Take Note is my new attempt to maybe help you cut through a small piece of that noise and share with you some of the amazing people and organizations I know of that are doing incredible things. If nothing else, it’s always good to give a couple of shout-outs and spread a little love, right?

Do you know of an organization or individual that we should be taking note of? I’d love to hear about it! 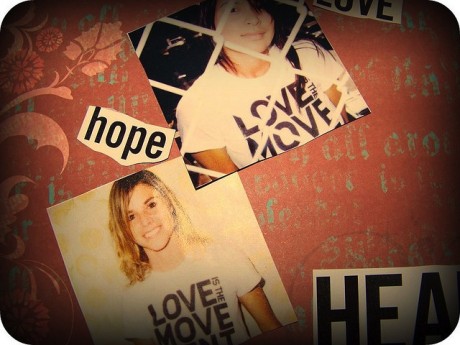 when it first came out, but recently decided I needed to re-read it. In the season of life I’ve found myself in “tribes” seem to be playing a big role. I’ve found a place in several different tribes of varying sizes. Tribes where I’ve found community, friends, & mentors. I’m also, somewhat begrudgingly, coming to the realization that whether I like it or not & whether I consider myself one or not, God may be calling me to be a leader within a tribe. And so, back to the basics I’m going.

I haven’t finished the book a second time yet, but in just the first few pages something struck me – the difference between a tribe & a movement. I think we often confuse or equate the two.

And the world needs more than tribes, it needs movements. It needs people who step out in faith and do something…together.

Sidenote: I found the image above in a Flickr photo group for To Write Love on Her Arms –  a tribe that has created a movement of love. Check out what they’re doing here.

God gives us a vision, then takes us to the valley to batter us into the shape of that vision.
-Oswald Chambers

I’m ready for the valley…ready for pain for a purpose.

How has or is God using the valley the batter you into the shape of the vision He has given you?

A couple of weeks ago, Stephen Proctor wrote this post about 3D Worship. The idea is that worship has 3 dimensions – up, across, and out. If you haven’t read it, you should. I think we are pretty good at expressing the up dimension most of the time and even doing well with the across dimension. The whole out dimension, however, I think the Church struggles with. We sing a lot of songs about “out” but how often do our visuals reflect that? I don’t think they do a lot of times. How often does worship flow from being focused on the out? Sadly, I don’t think very often. I would contend that part of that is because we aren’t living the out. When we live the out, the out dimension of worship flows naturally – both as we worship corporately and how we as visual worship leaders lead.

Last week I had the opportunity to lead some visual worship for just under a 100 teens at Hope Experience in Memphis. First, let me say, if you don’t know Paul Briney, you need to! Truly an example of a worship leader. Not someone who stands up to perform but someone who stands in front of a group of people broken and humbly pouring out his heart to lead others to worship freely from their hearts. That makes an incredible difference. If that isn’t happening, I’m not sure that what I put up on a screen is going to matter a whole lot. Leading and serving with Paul and all of the others involved was truly an honor. There were some incredibly powerful moments in worship but I wanted to share my top three. Moments that I look at and say “Thank you, Jesus! This is how it should all work together.” Moments where the music and the images on the screen become the backdrop and people are truly worshiping freely and with their whole hearts.

Moment #1:
Song: You are Here (Same Power) by Hillsong
Media: Christ in Me Longplay from worshipVJ
Context: The constant prayer for the week was “Christ, may you live in us. May we reflect your love. May you be glorified.” As we were serving the community, that was our focus – to share the hope that we have because Christ lives in us. We prayed it, we lived it, then we sang it and saw it on a screen. We worshiped.
Why it moved me: First, I simply LOVE this longplay. LOVE it! On this particular night we were worshiping and I looked at the three slides that were coming up and where the video was at. This was one of those God orchestrated moments where the words & the video timing matched up and I paused the video on this screen. Sure, the image wasn’t crystal clear & polished as a result but it fit. It worked with the mood and couldn’t be more perfect for the words. And we all worshiped – fully, freely, from our hearts. 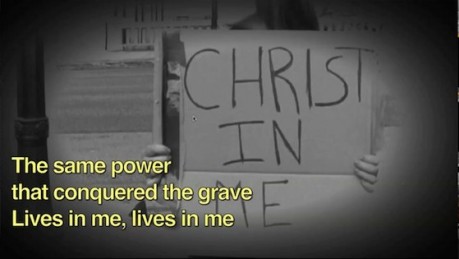 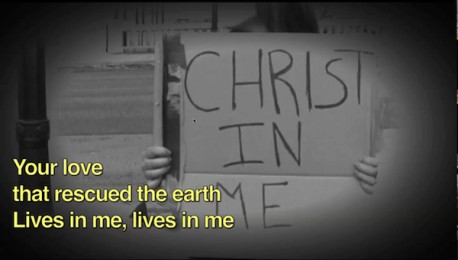 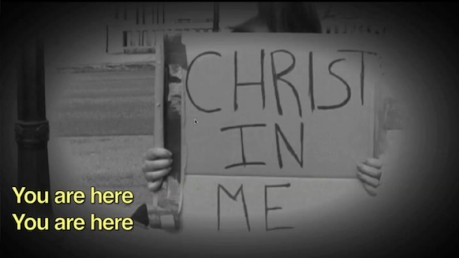 Moment #2:
Song: God of this City by Bluetree
Media: Walking Street Sample (I think I got this for guessing the fact that Proctor didn’t like the use of Papyrus in Avatar:)) You can find a similar loop on the new Playback Drive though. As well as self created photo video.
Context: Serving the city of Memphis every day – taking Christ’s light to the darkness, His hope to the hopeless, & His peace to the restless. We lived it then we sang it and saw it on a screen.
Why it moved me: I can’t tell you how many times in my life I’ve sang that song. And on different occasions in different contexts and at different points in my personal journey it has had unique significance. But, last week I think tops them all. When you are spending your days serving a city like Memphis and you see the darkness and have the chance to bring Christ’s light & hope this song takes on a whole new meaning! We sang this on the last night of worship. Paul encouraged everyone to worship freely – some gathered together to pray, some wrote prayers on posters outside that had been filling up throughout the week, some reflected silently, and some sang their hearts out. During the last Chorus we cut the lyrics and put up some images from the week of the hope that had been given. Wow! Talk about out. Talk about brining it home. What a powerful moment to be singing “You, God, are the God of this city…you are the hope to the hopeless,” while looking at images of how He had used us to give hope to the city of Memphis that week. 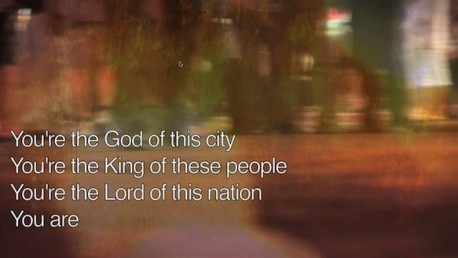 Moment #3: Acoustic Worship
One night we turned it all off. Lights off. Candles. Very few background images – lots of white text on a black screen. Everyone seated in a semi circle surrounding the candles – not facing the worship leader. A guy and his guitar. It was beautiful. We sang many of the same songs we had sung throughout the rest of the week but it’s amazing what a different feel they take on when you curate a completely different worship environment. My favorite part about it was the set up. Paul came to me about two hours before worship and told me what the plan was. He pointed to a box of candles and said he wanted them put on a platform around the projector and then the chairs arranged in a semi circle. I asked what the platform was going to be. The answer: whatever you can find. What I could find were three bread crates/trays, two empty coolers, and a case of bottled water. Arrange these items and you get a platform with some height variety. Cover it all in a couple of black sheets and place the candles on top. Done.

Did I mention our screen for the week was a full size white sheet pinned and duck taped to the wall? And that we had to cover the to windows behind it with black garbage bags to kill the light? It was great!! Seriously, it all reminded me once again that the tools are only part of the equation. Having a full stage sized, professional, triple-wide screen can be great and a powerful tool in leading worship. But so can a simple projector on a simple white sheet pinned to the wall in a gathering room with terrible acoustics at a camp outside of Memphis. At the end of the day, it’s about the heart and the focus. Through the words that were spoken, the Scripture that was read, the songs that were sung, and the media that was used people’s attention was directed not only up and across but out. And really the three dimensions intersected because one amplified another. As Proctor likes to say, the screen became a window to the world, not simply a mirror. But I think in order for that to happen we first have to live it. Then, we can sing about it and see it on and through a screen while worshiping fully and freely from the heart in a whole new way.